All custom orthotics are made on site under the direction of Ray Bauman, Certified Orthopedic Footwear Specialist. Foot Foundation offers several options to fit each specific need.

With direct moulding, an orthotic is heated and then formed to the client's foot using a variety of foam components as needed. After cooling, the orthotic is cut to fit into the specified footwear. Adjustments are included as needed for several months.

Cast-moulded orthotics require a much more lengthy process as the orthotic is created and formed to fit the client's foot in a more specific manner. Initially, a foam impression is made of the individual's foot and is then filled with plaster. Once the cast is created, raw materials are then moulded around the cast model of the foot to create a customized orthotic. Adjustments are made as needed.

All options can be discussed in store. 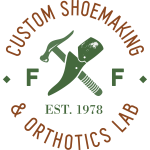