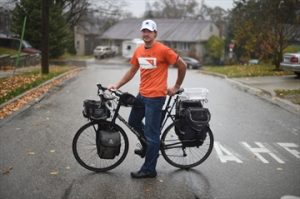 As the new year approaches, people often make resolution intended to improve their lifestyles and choices for the upcoming year. Charles (Charlie) Bauman has been resolving to do this for a number of months now, but it’s not for his personal benefit.

During a four-month round cycling trek that took him from Elmira, ON, to Fairbanks, Alaska, and back again, Charlie managed to raise over $15,000. Although Charlie returned to Elmira on October 9, his Cycle 4 Humanity fundraising campaign was still accepting donations until December 15. At the close of his cycling campaign, Charlie had raised $18,372.

“What he’s done is so remarkable at such a young age,” said Jermaine Hylton, spokesperson for World Vision Canada in Mississauga.

Since the beginning of his journey to Alaska, Charlie has had numerous encounters with various individuals – many of whom have been more than willing to help him out in his travels. One such example is taken from his trip through Fox Creek, AB. A woman working at the tourist information centre arranged a fundraising barbecue for his return trip from Alaska. That event raised over $500 towards Charlie’s goal.

This past trip helped him to realize that you don’t need to embark on a long journey to do good works. The community in which you live, is often where you can make the greatest impact. This knowledge (and a little push from his friends at World Vision) sparked a new adventure for Charlie. On January 1, 2015, Charlie will be marking the new year on his calendar with a plunge into the icy waters of Lake Ontario at Coronation Park in Oakville, ON.

Net proceeds for the event have been going to different World Vision water projects around the world since 1995 and over $1,201,000 has been raised in total. (Courage Entertainment Productions Inc.)

This year’s funds will go towards the support of the Rwanda: Right to Clean Water project. World Vision aims to raise $300,000 for this vital project that will help those in the communities of Gashora and Rugarama. According to the details surrounding this project, World Vision states that within the areas surrounding these communities there is very low rainfall. As well, there are very few natural springs in existence. This means that the majority of families living in these areas must draw water from dangerous locations including swamps infested with crocodiles, and rivers and lakes that contain extremely harmful bacteria. (Word Vision, 2014)