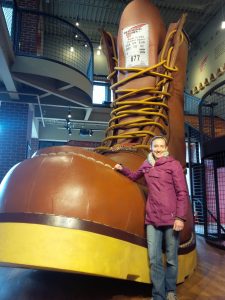 About a month ago, my husband and I took a little trip to Red Wing, MN. We were already in Minnesota for a family vacation so we thought it would be a good opportunity to take in the history and sights at the flagship Red Wing store, outlet, and museum.

Red Wing Shoe Company was founded in 1905 by Charles Beckman. As a shoe merchant in downtown Red Wing, MN, Beckman saw the need for comfortable, yet durable, boots. However, when he couldn’t find boots that met his needs, Beckman – like any hard-working businessman – decided to make his own.

Now, over 100 years later, every pair of Red Wing boots are still constructed with quality and comfort through premium craftsmanship and attention to detail. The commitment to excellence continues to be handed down from generation to generation. Each Red Wing boot contain signature elements such as, triple stitched seams, sturdy welt construction, and rich leathers.

Red Wing is the preferred brand of work footwear for skilled workers who demand the same quality in their footwear, as they demand of themselves in their chosen trade. (Red Wing Shoe Company, Inc., 2015)

Today, Red Wing Shoe Company has a number of well-known brands under their feet.

Red Wing operates two manufacturing facilities in the United States – one in Minnesota, the other in Missouri. The chain consists of over 500 stores in both the United States and Canada (with a mix of independently and company owned stores).

View of the World’s Largest Boot from the mezzanine.

“Red Wing is the number one brand of premium work footwear. Distributed in over 110 countries worldwide, the brand offers a complete line of work and safety footwear for the skilled tradesman” (Red Wing Shoe Company, Inc., 2015). The brand is available in over 200 styles, in sizes 4 through 20, and in widths AA to H.

The Irish Setter brand is the footwear most often used for hunting and work by many Red Wing enthusiasts. In 1950, style 854 was introduced – a boot crafted with Red Russet leather, the inspiration for the brand’s name.

In the ’60s, consumers wanted more from Red Wing – a durable boot designed specifically for play. To serve this market, a new line of hiking boots was launched. Today, Vasque is one of the most respected brands of outdoor footwear.

WORX footwear line was introduced in 1998. This option was designed for the price sensitive industrial safety shoe consumer. Both slip resistant and safety footwear are offered through this line.

Not only is Red Wing Shoe Company home to a number of well-respected brands, they also own the S. B. Foot Tanning Company. Acquired in 1986, they are the main supplier of leather for Red Wing Shoe Company. S.B. Foot Tanning Company also supplies premium leather for shoes, apparel, furniture, and many other applications (including supplying leather to the US Military).

During our visit to the flagship store, we visited the museum. The museum is located in the mezzanine, over-looking the retail store. Here, we had the opportunity to view the history behind the company. The museum showcased a number of different boots that have been manufactured over the last century. One pair was thought to be the first boot ever manufactured by Red Wing! The museum is rich with history, including how the footwear is manufactured right in the heart of Red Wing, MN, but current popular uses for Red Wing footwear is also documented. There was much to see at the flagship store and museum, but the most exciting thing (and the reason for our visit) was to see, first-hand, the world’s largest boot in person.

Thought to be the first shoe ever produced by Red Wing Shoe Company.

To celebrate the generations of shoemaking craftsmen, the World’s Largest Boot was created as part of Red Wing Shoe Company’s Centennial. It showcases the labour and dedication to quality that the company and its reputation were built upon. It was constructed in the original Red Wing facility (the same location where the company first opened its doors in the early 1900s). Over 60 current and past employees volunteered their time to construct the iconic work boot.

Upon entering the flagship store, we saw the boot sitting to the left of the main lobby. The 877 style was selected as it is the most well-known work boot manufactured by Red Wing.

The boot is a masterpiece! It was built using a last – the same process that is used in the regular production of footwear. This last, however, was constructed a bit differently than the ones we use or Red Wing Shoe Company uses. It was made of interlocking plywood ribs and then covered with fibreboard. The boot is made of real leather that was joined together using the same thread and sewing machines Red Wing uses in the regular production of their boots. The gusset label – the label the gives the details of the shoe – was sewn on a tapestry loom in Italy. The final stitching of the boot required lowering a person into the boot via a pulley system.

It took a total of 4,000 hours to design, engineer, and fabricate the boot!

Overall, it was a really neat experience to see the “World’s Largest Boot” up-close and personal. If you are ever in Red Wing, MN – for whatever reason – take time to stop in and take in the wonder of the giant boot. You can also visit the Red Wing Shoe Company factory, which offers tours to the public from May-October. Because we visited in February, this option was not available to us; however, should this be an interest of yours, the company brochure suggested contacting the Red Wing Visitor & Convention Bureau (1-651-385-5934) for information regarding tours.

×
We use cookies to ensure that we give you the best experience on our website. If you continue to use this site we will assume that you are happy with it.I AcceptPrivacy Policy